In 2017, there was a vigorous construction movement in China. Regardless of whether it is a newly-built automobile manufacturer, a traditional car company or BAT, it is deploying new energy vehicles (mainly electric vehicles) and automatic driving technology.

According to statistics of IT oranges, in 2017, there were 63 investment events in the area of â€‹â€‹new energy vehicles, involving a total amount of RMB 43.018 billion and an average single financing amount of RMB 683 million. 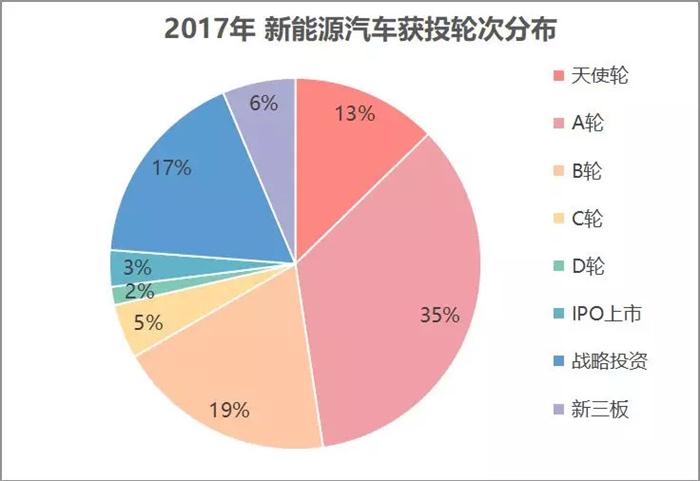 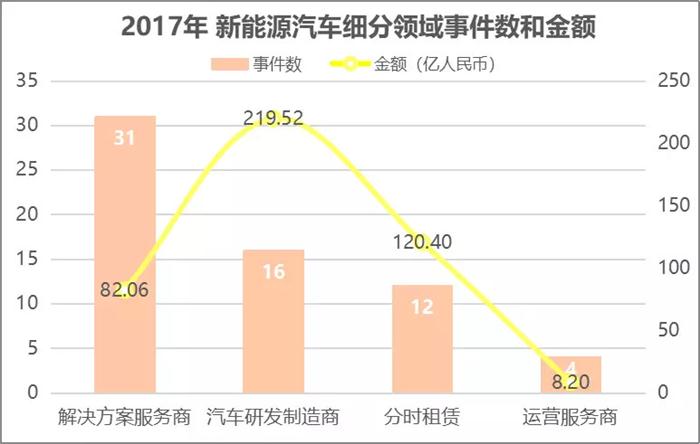 It can be seen that the R&D and manufacturing of the vehicle is indeed a very large investment project. Therefore, 16 investment events in this sector have obtained RMB 21.952 billion in financing, and the average single financing is RMB 1.372 billion, which is much higher than other industries. For example, the head company of the new energy automobile field, â€œVery new automobileâ€, got two rounds of financing in 2017, which were US$600 million and US$1 billion respectively; Weima Motor received US$1 billion in round B financing; Xiaopeng Automobile A was awarded RMB 2.2 billion; BYTON received $200 million in strategic investment. In addition, 12 investment events in the time-shared leasing sector attracted RMB 12.04 billion, which was mainly related to the RMB 11 billion B round of financing of BAIC New Energy.

The following is the TOP10 form of the major financing events in the new energy automotive industry in 2017: 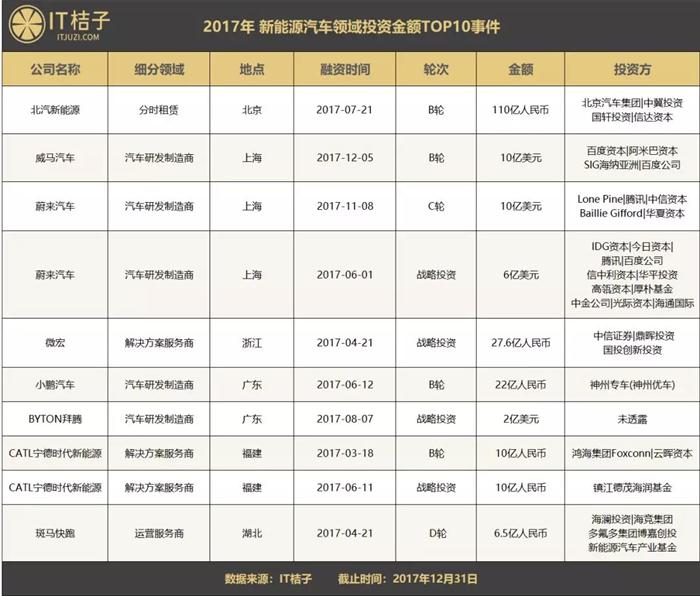 Newly-built car companies, BATs, and traditional car companies enter the office one after another, and the automotive industry usher in change

As for newly-built automakers, the first echelon start-up companies are Weilai Auto and Weimar Auto, both of which had received billions of dollars in large-scale financing in 2017.

Among them, after Weilai Automobile released the worldâ€™s fastest super NIO EP9 at the end of 2016, its first production car, the ES8, was officially launched on December 16, 2017, with a pre-subsidy price of RMB 448,000 as the benchmark. The battery rental program; and the first mass production model of Weimar Automobile was also unveiled on December 11, 2017, with a starting price of 200,000 and a maximum life of 600 kilometers. Compared to Jia Yueting's LeTV, the two companies' vehicle construction plans are steadily advancing.

Policies are favorable to drive the development of the industry

The advent of â€œMotor Constructionâ€ was due to ambitious entrepreneurs who were unwilling to abandon this â€œturning overtakingâ€ opportunity and on the other hand benefited from the subsidies of national policies.

At the national level, at present, Chinaâ€™s crude oil industry is heavily dependent on foreign countries. In 2016, foreign dependence reached 65.4%. Experts expect that the 2018 is likely to exceed 70%. The development of new energy vehicles will have a longer-term strategic significance for China's energy layout.

Therefore, many policies have been issued at the government level to actively guide the development of this sector. In particular, the cash subsidy policy has greatly increased the enthusiasm of the new energy automakers and thus ensured the supply of new energy vehicles. Data from the Ministry of Industry and Information Technology shows that in 2016, the number of new energy vehicles declared by enterprises was 94,072 units, enterprises had applied for liquidation funds of 6.415 billion yuan, and the number of promotion approved by the expert group was 85,095 units, and the subsidy funds for liquidation should have been 5.86 billion yuan.

At the same time, at the demand-side level, preferential policies such as easy-to-use and unlimited-opening policies brought about by favorable policies are the key factors for the willingness of owners to choose new energy vehicles, especially in domestic cities such as Beijing, Shanghai, Guangzhou, Shenzhen, and Hangzhou. In Tianjin, the cumulative sales of new energy vehicles are all in TOP6.

With the continuous improvement of the penetration and retention of new energy vehicles in China, the industrial development has entered a new stage. However, the unbalanced development problems that accompany it have also become increasingly prominent.

Not long ago, Minister of Industry and Information Technology Miao Wei's speech pointed out the potential crisis and dilemma of the current development of China's new energy automotive industry:

First, charging infrastructure is still a shortcoming of development. The problem of insufficient structural supply of charging infrastructure is increasingly prominent, and the overall scale is still lagging behind. The layout of charging facilities is also not reasonable enough. The utilization rate of public charging piles is less than 15%, and the sustainable business development model has not yet been formed. There is a two-way contradiction between the difficulty of operating corporate profits and the high price of consumer charging.

Second, the policy system still needs improvement. The development of the entire country's new energy automotive industry also depends on the continuous improvement of the policy system. The policies from the central government to local governments also need to be well connected, breaking local protectionism and accelerating the landing of policies.

Fourth, the post-market circulation service system needs to be improved. The after-sales service supporting system lags behind and has a certain negative impact on cultivating the consumer market. At the same time, the lack of evaluation standards for new energy vehicles used car market, the unsound circulation system, and the low rate of vehicle maintenance have affected the long-term development of the new car market.

The national standard is, factory water â‰¥0.3ppm, pipe network terminal water â‰¥0.05ppm;
The residual chlorine value is too high, and the stench of chlorine in the water will be very strong, which will not only stimulate the human respiratory system and eyes, but also may lead to allergies in many people.
The residual chlorine value is too low, the disinfection effect cannot be guaranteed, and the bacteria content in the water exceeds the standard, endangering human health.
Algae can also multiply rapidly, turning the water green and muddy, and accelerating pollution.
State regulations, swimming pool residual chlorine content in 0.3-0.5mg/L.